As you can see, the much-vaunted INSTEX is more or less useless, but it allows the EU nations to say that they are doing their best to engage in humanitarian trade with Iran. 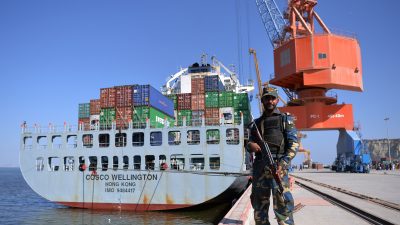 It’s an illusory financial transactions mechanism, pretending to reinstate normal trade with Iran — not fulfilled since announced in January.

What’s supposed to be an oil for goods mechanism is only for what the Trump regime hasn’t sanctioned, failing to cover exports of Iranian oil, gas, petrochemicals, and other products. It also falls woefully short of facilitating Iranian imports of food, medicines, and medical equipment.

Establishing it created the phony appearance of Brussels wanting normal trade relations with Iran. Reality is polar opposite.

European countries operate as US colonies, following its diktats, especially regarding relations with nations on its target list for regime change like Iran. JCPOA signatories Britain, France, Germany, and the EU failed to fulfill their mandated JCPOA obligations, going along with the Trump regime’s aim to kill the deal while pretending to want it saved.

The nuclear agreement was unanimously endorsed by the UN Security Council and is a key instrument for the global non-proliferation regime and a major contribution to stability in the region.

In light of the continuous European support for the agreement (sic) and the ongoing efforts to implement the economic part of it (sic), and to facilitate legitimate trade between Europe and Iran (sic), we are now in the process of becoming shareholders of the Instrument in Support of…INSTEX.

Fact: The above named countries, other European ones, and Canada breached the JCPOA by failing to abide by its provisions. Since the Trump regime illegally abandoned the agreement, breaching international and US constitutional law, European countries and Canada severed normal economic, financial, and trade relations with Iran.

Nations joining INSTEX changed nothing. They remain in breach of their international obligations by failing to observe JCPOA provisions. Unless and until they change policy, they remain complicit with Trump regime economic terrorism on Iran for its opposition to US aggression, support for Palestinian rights, and unwillingness to sell its soul to the imperial state at the right price.

For the past five months, Europe has been trying to give us credit in return for the sale of the Iranian crude oil to make the country stay in the JCPOA, but it has not been able to do even this little job because it is not even allowed by its master to spend its own money for its own security.

Its member states refuse to exercise their sovereign rights in dealings with Iran unless a higher power in Washington permits it.

On Saturday, Iranian Parliament’s National Security and Foreign Policy Commission spokesman Hossein Naqavi Hosseini said European JCPOA signatories have been in breach of the deal since the Trump regime illegally abandoned it. Iran’s legitimate incremental pullback of its voluntary JCPOA commitments failed to encourage its European signatories “to fulfill (their) obligations.”

inhumane (US) sanctions have negatively impacted the supply of medicines and treatment for more than 70,000 victims of chemical weapons in our country and have in fact hindered the treatment of chemical attacks victims.

The more European countries join the INSTEX mechanism as the shareholders, the better, but the effectiveness of the mechanism is another matter

adding that he doubts Europe will take practical steps to restore normal trade relations with Tehran.

The JCPOA is in “intensive care,” he stressed, Europe failing to save it by following hostile US policies toward Iran. Tehran joined the JCPOA to restore normal economic, financial, and trade relations with Europe. Without normalization, the deal is meaningless.

Award-winning author Stephen Lendman lives in Chicago. He can be reached at lendmanstephen@sbcglobal.net. He is a Research Associate of the Centre for Research on Globalization (CRG)

His new book as editor and contributor is titled “Flashpoint in Ukraine: US Drive for Hegemony Risks WW III.”

Visit his blog site at sjlendman.blogspot.com.