I don’t really know what to say about this article. But I do not support these protests in Hong Kong at all. They’re all pro-US conservatives! The protestors also support US foreign policy to the hilt and they support all neoconservative regime change operations. Why on Earth should I support any pro-US movement anywhere? They’re mostly bad news.

Hong Kong negotiated a deal with China in 1997. Over a 50 year period, Hong Kong would slowly revert back to Chinese rule, and all Chinese laws would be enforced. That’s what is happening here. The rioters are trying to go back on the deal. The thing is, Hong Kong is part of China! That’s all there is to it. If they don’t like being a part of China, maybe they should take off.

This whole mess started when a man in China murdered his wife. He was arrested in Taiwan. However, Taiwan has no extradition treaty with China, so he was not extradited to China, though he was wanted there for murder. So all of these riots started to support a wife killer.

Also, Hong Kong is full of corrupt officials. It’s one of the most corrupt places on Earth. It’s also an international money laundering haven for rich people in the West. That is its main value to the US and UK – as a money laundering center.

The government has always been very rightwing and pro-business. Business gets to do whatever it wants. The corruption among government officials is extreme, as they are all from the very rich and are tied in with the business community. Whenever you have a government of businessmen, you always have the most extreme corruption. Capitalists and corruption go hand in hand.

China wants to prosecute a number of these officials for corruption because the Hong Kong courts and justice system are completely corrupt and is controlled by the same wealthy corrupt businessmen that run the economy and the government.

I’m not really understanding the rest of the rioters’ demands. However, they have been extremely violent since early on, and the police have been remarkably easy on them. I doubt if police would go that easy on rioters anywhere else in the world.

A good 40% of the population oppose the riots because of the violence and destruction. However, the demonstrators and rioters do have major support inside Hong Kong. I don’t know what to say about that.

Obviously these are secessionists. They want to secede and become a US colony. That’s not going to happen and China is right to be alarmed at this color revolution right next door. The CIA and all the rest of the US regime change color revolution organizations have been involved in this from Day One.

Such an extreme anti-Beijing vote could only be obtained by massive Western propaganda at the cost of millions of dollars, targeted with algorithms developed on the principles of the now (apparently) defunct Cambridge Analytica. And this with 70% of eligible voters going to the polls. 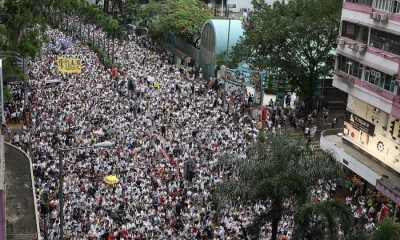 None of this practically non-realistic result was analyzed by the West and reported on. In reality, the vast majority of Hong Kongers is sick and tired of the western inspired violence, but are very much proud of being Chinese citizens.

They were told by the propagandists that voting for ‘democracy’ candidates was the way to bring peace. And Peace is what everyone wants. After all, integrated into China in 1997, they have enjoyed much more freedom than under British colonialism, where they were not even allowed to vote for their district councils.

The absurdity does not stop here. The US Congress has recently passed legislation that would allow the US monitoring ‘democracy’ and human rights in Hong Kong, the so called “Human Rights and Democracy Act”, with the caveat of imposing sanctions if Beijing would transgress on the US imposed rules. Can you imagine? Can anyone imagine this all-overarching arrogance?

The US Congress passing legislation to control another foreign territory? And the West goes along with it. It may happen soon in Europe too that the US dictates what sovereign nations are allowed to do and not to do.

It is already happening. The US prohibits Europe to do business with whom they want – i.e. Iran, if not, they are being punished. No comments. It’s just the new normal. In the case of Hong Kong, Beijing has protested, called the US Ambassador twice to discuss the matter – to no avail.

It gets even more ludicrous. Madame Michelle Bachelet, High Commissioner of the UN Human Rights Commission in Geneva, has published in the Saturday issue of the South China Morning Post an article seeking full and “independent and impartial judge-led investigation” into police conduct at protests as part of confidence-building measures.

The statement in itself already takes sides, as it does in no way address the foreign-inspired violence of protesters, who, for example, are using a university campus to build Molotov-type bombs and other incendiary devices.  The Chinese Government immediately rebuked the article accusing Ms. Bachelet of further inflaming ‘radical violence’.

In a statement issued on Sunday, Chen Yaou, spokesman for China’s permanent mission to the UN, launched a scathing attack on what he called an “erroneous article” by Michelle Bachelet. Chen emphasized that China “strongly opposed” Bachelet’s article, saying she had interfered in the internal affairs of China and would only encourage protesters to use more radical violence. Mr. Chen added that

Despite the overwhelming pro-democracy vote on 24 November 2019, protests continue. Thousands took to the streets on Saturday afternoon assembling before the United States Consulate in Central, to “express gratitude” for passing the Hong Kong Human Rights and Democracy Act. They were waving US flags and chanting the Star-Spangled Banner and were asking for more support. They pledge not to let go until all their demands are met.

Essentially, they want total independence from Beijing and to become a US colony. They should look to Puerto Rico at what it means to be a US colony if they what Washington does to its colonies. Or closer to their own history. They should look at their UK colonial past, and remember their state of oppression, the almost zero rights they had then.

What does this all mean for Hong Kong? At the time of the UK handover to China in 1997, Hong Kong contributed about 18% to China’s GDP. Already before the protests began some 6 months ago, it had shrunk to a mere 3%. Within the last few months HK’s economic output has further declined, as key financial institutions want stability and therefore are leaving Hong Kong for safer venues, i.e. Singapore, and, indeed, even for Shanghai, which is rapidly becoming the financial hub of the east.

The real purpose of the 50-year special status of Hong Kong that the UK (and US) negotiated with Beijing was to keep this unregulated Eastern financial paradise alive for Western oligarchs’ often illicit and tax-evading financial transactions of which the Western – UK and US – bankers and financiers were the key beneficiaries and profiteers.

These US-inspired violent protests are meant to destabilize the Government of Beijing – which is, of course, a pipe dream – when in fact, they are slowly committing suicide. Washington and London are disabling Hong Kong of her West-serving money-laundering capacity.

And if it comes really down to the level of intolerant crime and violence against the majority of HK citizens by this foreign-inspired and -funded disruption of SAR, Beijing could in less than 24 hours put an end to it. So simple. The West could just gape but say nothing, because it is in Beijing’s full right to restore law and order in their territories.

Now, let’s look again at the US arrogance to pass legislation to control a foreign territory. Could anyone imagine the logical opposite? Suppose China passes legislation to ban any foreign interference in their territories with the threat of sanctions.

These could include outright import bans for certain US goods – for example, agricultural produce, or stopping crucial exports to the US (iPhones, computers, other US-outsourced manufactured-in-China goods), barring certain US citizens from entering China – or, God forbid, building a military base in Venezuela and/or Mexico – Mexico being the latest Latin American country being harassed by the US for its left-leaning government.

It is only by equals facing equals that maybe, just maybe, we can achieve harmonious and peaceful coexistence. This applies politically as much as it does economically – and in economics, China is the unspoken front-runner with a strong and stable currency backed by her economic output and gold, versus an entire not only US but Western economy based on fiat money.

Peter Koenig is an economist and geopolitical analyst. After working for over 30 years with the World Bank he penned Implosion, an economic thriller, based on his first-hand experience. Exclusively for the online magazine New Eastern Outlook. He is a Research Associate of the Centre for Research on Globalization.

Featured image: More than a million Hong Kongers joined marches in June to oppose a China extradition law. But some say the US is quickly backing the protests. Photo: Don Ng/ EyePress