Very nice article that lays bare a lot of the bullshit surrounding the Lebanon protests. Of course they are being manipulated by the US and Saudi Arabia to turn them into anti-Hezbollah demonstrations with the aim of overthrowing the Hezbollah government.

Yes, you heard me right. The Lebanese government right now is controlled by Hezbollah and its allies. This has been the case since 2018 when they won the elections. Hezbollah has 55% and the anti-Hezbollah group consisting of Sunnis, Druze and half of the Christians has 35%. 10% are neutral.

So we have yet another case here of a minority trying to overthrow a majority as was recently done in Bolivia, Honduras, Brazil, Ecuador, Haiti, Paraguay, and Ukraine, and as the US is attempting to do in Venezuela and Nicaragua, with regime change operations in Dominica and probably Mexico coming soon. The Dominica operation is already well underway.

Everywhere around the world, anti-US regimes are being overthrown with regime change operations, often coups of one variety or the next. The US simply does not believe in democracy at all. It only likes democracy if its favored groups win. If the groups it does not like are in power, the US will always try to overthrow them even if they have majority support. And we’ve been doing for over a century now.

The Explosion in Lebanon Has Been Delayed: Until When?

Europe is concerned about the Lebanese political crisis and its potential spillover consequences in case of a civil confrontation. Even if the European states do not have differing strategic objectives in Lebanon from the US, a civil war will affect Europe directly, as refugees will be flocking from the neighbouring continent. 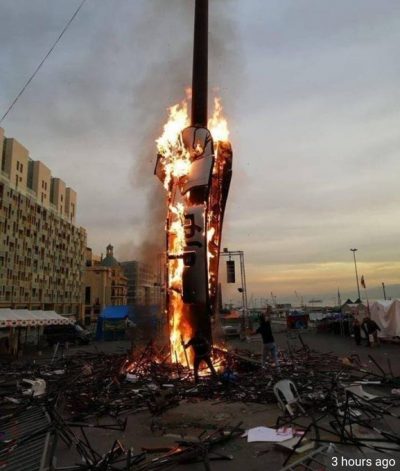 Reaching an agreement over a new government to prevent further unrest is proving difficult. Sources in Beirut believe it may take several months to form a new government as was the case in forming the last government. Some wonder if it might not be better to wait for the results of the US elections before forming a new government.

Or perhaps a new government will only emerge after a major security event, like the assassination of the late Prime Minister Rafic Hariri which triggered a political tsunami in the country. All indications on the ground point to the prospect of a civilian confrontation arising from the absence of a robust central government that can take in hand the security of the country. Can Lebanon avoid a civil confrontation?

The closure of the main roads and the “deliberate” incompetence and inaction of the security forces – due to US requests to tolerate the closure of main axes linking Lebanon with the capital – is no longer surprising behaviour.

The main roads now closed have been carefully selected: closed are the roads linking the south of Lebanon to Beirut and linking Baalbek and the road to Damascus with the capital Beirut. These areas are mainly inhabited and used by Shia. The roads are being blocked mainly in certain sectarian areas controlled by Sunni supporters of the caretaker Sunni Prime Minister Saad Hariri and his Druse ally Walid Joumblat.

The closure of other roads in the Christian-dominated Dbayeh by the pro-US Christian leader Samir Geagea, leader of the “Lebanese Forces”, and in Tripoli seem to be diversions of attention from the main goal: challenging Hezbollah.

Sources in Beirut believe the objective is to exasperate the Shia who represent the society that protects Hezbollah. The goal is to force the organisation into the streets. Hezbollah is aware of this and is trying to avoid responding to provocations. The closure of these roads is an invitation to Hezbollah to take the situation in hand and direct its weapons against other Lebanese citizens, as indeed happened on the 5th of May 2008.

Israel never ceased to monitor the Hezbollah cable that, due to its high-security system and regular control, had managed to neutralise all Israeli tapping devices attached to it by Israeli Special forces during their infiltration to Lebanon for this exact purpose.

An effort was made by the Lebanese government in May 2008 to cut the cable to break through Hezbollah’s high-security system, the key to its command and control in time of peace and especially in time of war. This insistent attempt – despite repeated warnings – provoked two days later a demonstration of force by Hezbollah occupying the entire capital in a few hours with no serious victims.

Lebanese pro-US armed mercenaries who gathered and hid in Beirut to trigger a civil war on this day, anticipating Hezbollah’s possible reaction, were neutralised in no time despite hundreds of millions of dollars spent on their supposed readiness for war against Hezbollah in the streets of Beirut.

Today the goal is to see Hezbollah controlling the streets and arming anti-government Syrians and Lebanese. The goal is to take the Lebanon issue to the United Nations. The aim is not to see Hezbollah defeated by the initial clashes: the firepower, training, and military organisation of Hezbollah cannot be defeated by enthusiastic mercenaries and locals.
Their aim is to deprive Hezbollah of its legitimacy and pay a heavy price for its “unforgivable” victories in Syria and Iraq and its support to the Palestinians and the Yemenis.

Lebanon’s financial problems are not the primary issue.

In Congressional testimony, the former US Under Secretary of State and Ambassador to Lebanon, Jeffery Feltman, told the US Congress that “Lebanon’s entire external debt (around $35 billion) is in line with the estimates of what Saudi Arabia is bleeding every year in pursuing a war in Yemen ($25-$40 billion).”

Regional and international financial support to Lebanon will be injected with one purpose: to trigger a civil war in the hope of defeating Hezbollah in the long term. This might also save Israel from a severe political crisis by provoking a war against Lebanon rather than an internal conflict among Israelis, as seems possible after two failed attempts to form a government.

Most Lebanese are aware of the sensitive and critical situation in the country. Most fear a civil war, particularly in view of the behaviour of the Lebanese Army and other security forces who are now standing idle and yet refusing to keep all roads open. These actions by the security forces are greatly contributing to the possibility of an internal conflict.

Sincere protestors with only a domestic agenda have managed to achieve miracles by crossing all sectarian boundaries and carrying one flag: an end to corruption and associated poverty and the return of stolen capital to Lebanon.

Protestors are asking the judiciary system to assume its responsibility and for the country to head towards a secular ruling system. But sectarian elements and foreign intervention are managing to divert attention from the real national demands that have been overwhelming the Lebanese since decades.

The foreign intervention is not relying on the justified demands of protestors in its confrontation with Hezbollah. It is relying on sectarian Lebanese who want to contribute to the fall of Hezbollah from the inside.

This is not surprising because Lebanon is a platform where the US, EU, and Saudis are strongly present and active against the Axis of Resistance led by Iran. The Iranian Revolutionary Guard Corps (IRGC) commander Hussein Salame warned in his most recent speech that these countries risk “crossing the line.”

Since the Islamic Revolution in 1979, Iran has not initiated a military or preventive war on its neighbours but has limited its action to defending itself and in building its “Axis of Resistance”. Recently, Iran proposed – to no avail – a HOPE (Hormuz Peace Endeavor) to its neighbours, seeking a commitment to the security of the Middle East separately from any US intervention.

Iran defeated the mainstream international community when it helped prevent the fall of the government in Damascus after years of war. It has effectively supported Hezbollah and the Palestinians against Israel, favoured ally of the US; Iran stood next to Iraq and prevented a hostile government reaching power; Iran has also supported the defence of Yemen against Saudi Arabia’s useless and destructive war.

Iran’s enemies are numerous and have not given up. They tried but failed to achieve their objectives in 2006 in Lebanon, in 2011 in Syria, in 2014 in Iraq, and in 2015 in Yemen. Today a new approach is being implemented to defeat Iran’s allies: the weaponization of domestic unrest motivated by legitimate anti-corruption demands for reform at the cost of “incinerating” entire countries, i.e. Lebanon and Iraq.

Protestors have failed to offer a feasible plan themselves, and caretaker Prime Minister Hariri is trying to punch above his parliamentary weight by seeking to remove political opponents who control more than half of the parliament. Lebanon has reached a crossroads where an exchange of fire is no longer excluded. The conflict has already claimed lives. Thanks to manipulation, Lebanon seems to be headed towards self-destruction.

All images in this article are from the author