Granted, there’s a lot of hyberbole in this article. There’s no evidence that ethnic cleansing of or South African-style apartheid against Bolivia’s Indians is going to happen, and it seems a bit far-fetched.

But trust me when I say that this coup is absolutely racist to the core.

The opposition in Bolivia is strange. They’re White Supremacist Nazis who aren’t even White people! They just think they’re White. I really doubt if there are more than 5-10% actual Whites in Bolivia – never mind that they’ve always run the country.

The Bolivian Nazi opposition are actually mestizos – how dark they are is a matter of conjecture – but they’re not pure White by any means. I remember the time I saw a Bolivian opposition woman waving a Nazi flag. I looked closely at her and she was quite brown-skinned. She had more or less White features, but she obviously had some Indian in her. The contrast was shocking. I’m thinking why in the Hell is this brown-skinned mestizo woman waving a Goddamned Nazi flag?

What’s odd here is that this seems to lend credence to the moronic anti-racists’ attitude that there’s no such thing as race and that race is simply a social construct.

That’s obliviously not true, but it’s definitely the case that the race people identify with is not necessarily their own. In other words, people’s own racial identification is often a hallucination or a product of their mind.

The opposition comes from the wealthier eastern part of Bolivia which is more of a tropical jungle than the freezing Andean highlands where the Quechua and Aymara Indians with the bowler hats reside and have long worked in the mines, lately mostly tin mines. Bolivia has long been one of the world’s biggest producers of tin.

Recently riches of oil and natural gas have been discovered in the east, and this has resulted in a lot of prosperity in that region.

Morales’ economy was not socialist by any means, but he infuriated these mestizos in the east by nationalizing the oil and gas reserves for the Bolivian people. Previously they had been privately owned, and having them owned by the private sector was a great way for a lot of the people in the east to suck a lot of that oil and gas money out of the country and into their pockets.

There are also Indians over in the east – lowland jungle Indians. I’m not sure that the easterners have any problems with them.

Morales also massively redistributed wealth in the country, taking a lot of the oil and gas wealth from the east and shifting it over to the Indians in the west. Obviously this infuriated the easterners. Well, if you think income redistribution is the definition of socialism, I suppose Morales had a socialist economy, but that’s not the way I define the term.

As the article points out, Bolivian politics have always been about the ruling mestizos and Whites’ overwhelming hatred of the Aymara and  Quechua Indians of the western mountains. That’s the theme running through Bolivian politics for over 100 years.

With Morales, for the first time, the Indians had power in Bolivia. It must have been a supreme insult for these haughty mestizos to be ruled by those lowly Indians. A similar dynamic is going on in Venezuela. The light-skinned ruling class is furious that darker-skinned more or less “niggers” are ruling over them. It’s like the maids and the servants taking over your mansion and locking you in your bedroom while they party with your stuff.

Morales also engaged in a lot of affirmative action with the Indians, so a lot of jobs were opened up to Indians that were closed off to them in the past. I assume that Bolivian Indians are about as competent or intelligent as Bolivian mestizos, so I don’t have a problem with AA when the groups are relatively equal.

I just don’t like lesser qualified people being hired and promoted over the more qualified ones. To say that’s perverse is an understatement.

But I believe that that AA for the Indians is definitely on its way out with this new government. They’ve made some statements along those lines.

Frankly, the statements being issued by the new fascist coup regime officials are absolutely shocking in their outrageous and blatant racism against Indians. There’s also a frightening amount of venom behind those words.

I knew the US always loves fascists, but I didn’t know we loved actual Nazis. Well, we supported them in prior fascist governments in South America in Bolivia and Argentina in particular.

And we installed a blatantly Nazi regime in Ukraine, mostly anti-Russian Nazis in that case. By the way, Israel was a strong supporter of the Nazi putschist regime in Ukraine. Many young Israelis went over to Ukraine to fight in the Maiden alongside out and out Nazis.

I’m sorry but I lose all respect for any Jew who supports Nazis for whatever insane reason they have. I really don’t care what happens to Jews like that. You don’t support your worst enemies for God’s sake. If you do, you’re an utterly amoral slug of a person, barely fit for life. You don’t stand for anything and you have no morals, no values, nothing at all of any consequence. You’re basically just a pure whore of a human being.

Here we are again, supporting Nazis, this time anti-Indian Nazis. Just when I think my country can’t get any lower, we do something like this. 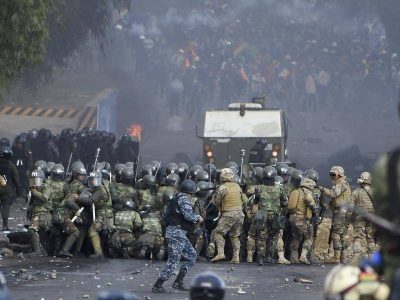 Post-coup Bolivia is at risk of Croatian-style ethnic cleansing and South African-like apartheid unless the protesters succeed in putting substantial international pressure on the new “authorities” and ensuring that genuinely free and fair elections are held as soon as possible as the most realistic attempt to reverse the recent regime change.

The Hybrid War on Bolivia succeeded in carrying out regime change and could potentially have far-reaching geostrategic consequences, but its most devastating impact might be domestic if the new “authorities” are allowed to carry out their socioeconomic agenda.

Post-coup Bolivia is at risk of Croatian-style ethnic cleansing and South African-like apartheid unless the protesters succeed in putting substantial international pressure on Jeanine Anez and her military backers in order to ensure that genuinely free and fair elections are held as soon as possible as the most realistic attempt to reverse the recent regime change.

“Former” President Morales’ Movement For Socialism (MAS) reached an agreement with the the self-professed “president” on Thursday night to work towards new elections, during which time lawmakers also voted to approve a member of MAS as the new Senate head. Although there are still protests and the death toll continues to rise, the latest political developments are somewhat encouraging, but that doesn’t mean that the Hybrid War itself is over, or even close to it.

A Christian Supremacist As The “Head Of State”

Anez is a Christian supremacist who harbors extremely racist views towards her country’s indigenous population. She wrote in a now-deleted tweet from April 14, 2013 that

“I dream of a Bolivia free of Satanic indigenous rites. The city is not for the Indian: they should go to the highlands or the Chaco”.

She also dramatically declared herself president while brandishing a gigantic Bible and stating that “the Bible has returned to the palace“, which was meant to imply that President Morales wasn’t really a Christian like he claimed but a paganist because of his previous support of indigenous religions.

Taken together, it convincingly appears that one of the hyper-nationalist coup plotters’ agendas is to ethnically cleanse the indigenous population out of the cities and back to the countryside where their racist supporters believe that they “belong” so that the “civilized” parts of the state can become “purely” Christian.

The Roots Of Racist Rage

President Morales’ 13 years in office saw the massive influx of indigenous people to the cities as this demographic became empowered through his socioeconomic policies and finally began to more actively play their rightful role in the country’s affairs.

This shift upset some of the mestizos who felt that their comparatively privileged positions were being challenged with the connivance of the state, which contributed to their rising anger against the long-serving leader and the racist-fascist views that some of them started to more openly embrace as a result of perceiving this to be a “civilizational struggle”.

“has long been dogged by rumors that his family members were involved in the country’s powerful fascist Ustashe movement.”

It’s a well-known fact that many former fascist fighters from all over Europe fled to South America after the war, so it wouldn’t be surprising if those rumors about his family are true.

Hence, the case can be put forth that some of the former fascist fighters who fled to South America (of which Marinkovic’s family might have been a part) fertilized the social soil over the past seven decades and made the revival of World War II-like fascism possible in present-day Bolivia.

Modern-day Croatia, one should be reminded, is the partial geopolitical revival of a Nazi puppet state, and it carried out the largest ethnic cleansing in Europe since 1945 during 1995’s US-backed “Operation Storm” against over 200,000 members of its indigenous Serbian minority.

History has an odd way of repeating itself, and while that same scenario probably won’t unfold the exact same way in post-coup Bolivia, its ethnic cleansing end game could potentially be pursued by pressuring the indigenous population to leave the cities en masse following a forthcoming campaign of state-supported intimidation against them.

This could be “cleverly” conducted away from the watchful eye of the international community through “plausibly deniable” means such as turning a blind eye towards fascist mob violence, the de-facto imposition of discriminatory hiring practices by coup-sympathizing mestizos, and the dismantlement of the plurinational state promulgated under President Morales on the basis of “removing societal divisions”.

The latter isn’t just purely speculative either since Anez said that:

…which could be interpreted as a dog whistle to her supporters that the coup “authorities” intend to reverse the hard-earned socioeconomic and political gains that the indigenous population received during President Morales’ tenure.

Affirmative action programs could therefore be rolled back on the basis that they were “polarizing the country along ethnic and class lines” in a way inimical to Anez’ “inclusive and unifying” vision, potentially even making the AA programs restricted to specific territories instead of demographics so as to encourage indigenous migration back to the countryside as a first step towards apartheid.

After all, to crudely paraphrase the feelings that many of the coup’s mestizo supporters have towards their indigenous compatriots, the mestizos believe the Indians are “uncivilized heathens” who “deserve” to live in ethnic “reservations” that would de-facto function as a Bolivian form of South Africa’s notorious “Bantustans”.

Putting pressure on this enormous segment of the population to “return to their rightful homes” for both physical safety and social security after being intimidated to leave the cities and having their affirmative action rights stripped from them unless they live in specific territorial zones could eventually accomplish the dual goals of Croatian-style ethnic cleansing and the imposition of South African-like apartheid.

All the while, these Indians would also risk becoming slaves to the neoliberal-globalist system that the coup plotters are planning to impose upon the country, therefore becoming second-class citizens once again after almost a decade and half of finally experiencing freedom.

It’s therefore incumbent upon the Indians to do everything within their power to put substantial international pressure on the new coup “authorities” and ensure that genuinely free and fair elections are held in order to avert this worst-case scenario before it’s too late and the world stops caring.

This article was originally published on OneWorld.

Andrew Korybko is an American Moscow-based political analyst specializing in the relationship between the US strategy in Afro-Eurasia, China’s One Belt One Road global vision of New Silk Road connectivity, and Hybrid Warfare. He is a frequent contributor to Global Research.