It’s been obvious for a long time now that this guy was a spy, we only didn’t know for whom, although British intelligence was always suggested. I doubt if the White Helmets never rescued any civilian casualties of Russian and Syrian attacks on rebel areas. These raids cause a lot of civilian casualties, and there is a lot of footage of White Helmets people rescuing civilians injured in bombardments.

On the other hand, it’s long been true that they only operate in Al Qaeda areas. It’s also long been suspected that they were behind the many chemical weapons false flag attacks in Syria. Recently, 40 members of the White Helmets testified in a court in the Netherlands that the Syrian government had not conducted any chemical weapons attacks in this war and that all of the so-called attacks were simply false flags, typically created by their organization, the White Helmets.

It looks like he was murdered by persons unknown, possibly another intelligence agency, and his body was left under his balcony in order to make it look like he committed suicide by leaping off his balcony.

Precisely five days before he was apparently murdered, Russia released a statement saying that Mesurier was a long-time intelligence agent in the employ of the horrible British intelligence agency, the MI6. They’re as horrible as the CIA, if you are interested. Pure monsters. They have literally murdered innocent people in order to frame enemy countries with the killings. He was outed as a Western spy, and five days later, he turns up dead. Hmmm.

Despite the conjecture in this article that he was killed by Western intelligence agencies with whom he worked or allied with, I really don’t know at the moment who killed this guy, how or when. We may never know. Spy deaths are like that.

I don’t have a lot of sympathy for this guy. If you’re selling life insurance policies, I doubt if you would want to sell one to a spy. Spies tend to have a habit of turning up dead under very mysterious circumstances in homicides that are never solved.

Double agents in particular have an extremely short life expectancy. I don’t have much sympathy for double agents at all. To me they are like idiots who climb Everest or jump out of airplanes. They are deliberately engaging in extremely risky behavior with a significant chance of death, so why should I care if they die? I mean they played with fate and lost. Moral: don’t be so stupid. 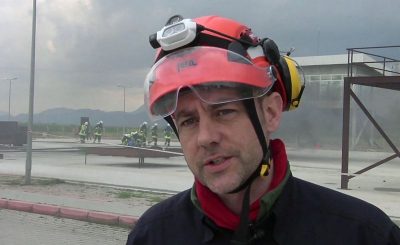 James Le Mesurier, the founder of the Al-Qaeda affiliated White Helmets, known as an “aid organization” in the West but known everywhere else for fabricating chemical weapon provocations in Syria, was found dead in Istanbul on Monday under dubious and confusing circumstances, and many question marks are being raised about his death.

The connection between the M16 and the White Helmets is often overlooked by the Western media, but on Friday, the Russian Foreign Ministry made a startling revelation. Foreign Ministry spokeswoman Maria Zakharova revealed that

“The White Helmets co-founder, James Le Mesurier, is a former agent of Britain’s MI6 who has been spotted all around the world, including in the Balkans and the Middle East. His connections to terrorist groups were reported back during his mission in Kosovo.”

A few days later he was found dead…

Of course, Karen Pierce, the UK Permanent Representative to the UN, denied the Russian allegation, claiming that they were “categorically untrue. He was a British soldier,” before describing the mercenary as a “true hero.” The claim he is a “true hero” is a curious choice of words considering he has a long history of working alongside terrorists, as Zakharova correctly highlighted.

He served in the NATO war against Serbia to defend the ethnic-Albanian terrorist Kosovo Liberation Army (KLA) in 2000, who have now turned Kosovo into a heroin ‘smugglers paradise,’ and a hub for human trafficking, organ harvesting, and arms trafficking in the attempt to create an anti-Russian “Greater Albania.” However, it was not in Kosovo where he achieved his fame, but rather his dubious work in Syria.

Not only did he establish and develop the White Helmets, but he secured significant funding from the UK, U.S., Turkish, German, Qatari, Dutch, Danish, and Japanese governments, and helped raise money on Indiegogo.

His deep connections to the British military and his expansive experience as a mercenary serving Gulf dictatorships made him the perfect figure to establish a “rescue group” aimed at legitimizing terrorists operating in Syria and to push for a regime-change intervention.

Along with the White Helmets’ ties to terrorist organizations and faking chemical weapon incidences, the group also has a role in the execution of civilians and using children in their propaganda campaigns. Mesurier was without a doubt a man with deep connections and deep pockets, with every resource available to him from international intelligence agencies and significant experience in supporting terrorists in conflict zones.

The argument that the White Helmets are not a civil defense team, especially as they never operated in government-held areas despite claiming to be neutral in the war, can easily be made.

Despite the constant colonial media claims that the White Helmets are a true civilian rescue organization without terrorist links, Syrian film producer Kareem Abeed was not allowed to attend the Academy Awards to support his movie about the White Helmets, “Last Men in Aleppo,” as his visa application was officially denied by the U.S. government as he was “found ineligible for a visa under Section 212(f) of the Immigration and Nationality Act.”

The very fact that the U.S. found White Helmets members nominated for the Academy Awards to be a risk in the country shows that the White Helmets are just another classic example of Washington weaponizing terrorists to advance their own agenda, just as the KLA were used against Serbia or the mujaheddin that morphed into Al-Qaeda were used against the Soviet intervention in Afghanistan.

Although the White Helmets played a pivotal role in the propaganda campaign against Syria from 2013 onward, they now have nothing to defend or any purpose to serve, as they only operate in areas that are undeniably controlled by Al-Qaeda affiliated groups and other radical elements, in a very, very small area of Syria. They can no longer portray themselves as an innocent organization that only helps civilians, as there is now endless evidence of their ties to terrorism, foreign intelligence agencies, and doctoring of footage.

In other words, the Turkish media seems to have tacitly admitted that White Helmets are not an innocent non-governmental organization. Of course, after Turkey’s invasion of Northern Syria, there were some changes in the Damascus-Ankara relationship. The West’s approach to the Turkish invasion of Northern Syria may have also played a role in changing the attitude towards the White Helmets.

A security source claimed that Mesurier had fallen from the balcony of his home office, with his death being treated as a suspected suicide, with a third person – a diplomat – claiming the circumstances around his death were unclear, according to The Sun.

This also comes as BBC journalist Mark Urban said in a series of now-deleted tweets that it would not “have been possible” to fall from Le Mesurier’s balcony, with him also Tweeting that “there’s a good deal of suspicion it may be murder by a state actor, but others suggest he may have taken his own life.”

Essentially, no one knows just yet whether it was murder, suicide, or an accident. This has not stopped the British media from alluding that there may be a connection between the “Russian smear campaign” made on Friday and his death on Monday.

However when we look at the way the incident took place, there is every suggestion that this incident was murder, given that there were cuts on his face, fractures on his feet, and that he was found dead on the street, according to Turkish media. The probability of murder becomes stronger.

The question then shifts to who might have done it? It is too early to say who did it, and anything can only be considered speculation, but the West does have a rich history of making their assets disappear when they are no longer needed.

The White Helmets no longer have a purpose to serve in Syria with the inevitable victory of government forces over the Western-backed terrorists. Rather, the danger the White Helmets pose is a full-scale revelation on how deep their ties with Western and Gulf intelligence agencies and terrorist organizations go. Although revelations are slowly beginning to emerge, Mesurier no doubt had a wealth of knowledge on many dirty secrets related to Syria and the imperialist war against it.