This is taken from Moon of Alabama, one of the few places on the Web where you can find actual honest commentary about the issues of the day. If you will notice as you read below, you will see that almost every single thing the media has been telling you about Russia for some time now is a straight up 100% lie.
What is shocking is that almost 100% of the Western media is in on these lies. Until Tucker Carlson questioned the latest fake chemical attack on Fox News the other day, not one single US news outlet had questioned any of the anti-Russian lies that the media pumped out. And Fox is still presumably full of people pumping out the latest anti-Russian bullshit.
This is quite striking.
With all of our media outlets, wouldn’t you think that there might be even one that might go against the dominant narrative? But there isn’t. The entire US media is in lockstep on all of this stuff.
The only dissenters are some far Left and far Right outlets on the Internet that are always broke and have small audiences. Even these small audiences are too much for the powers that be though, so they are trying to shut them down in various ways.
One way is via getting rid of Net Neutrality. Now that Net Neutrality is gutted, the ISP’s, who are after all part of the same power structure that controls the media and the state, will have the power to put any alternative media in the slow lane and offer fast lanes only for favored media. Getting rid of Net Neutrality has always been in part about getting rid of alternative voices to what for all intents and purposes is the Deep State.
In addition, the fake news bullshit story was immediately picked up by all powers all over the world.
Obama immediately decided that any news attacking his administration or US foreign policy was fake news.
The Democratic Party instantly said that all news against the Democratic Party was fake news.
The same thing happened on the Republican side to an even greater extent.
The fake news controversy was then weaponized by the Deep State to go after alternative media that is calling bullshit on all the Deep State’s wicked machinations. Google and Facebook then wrote new “anti-Deep State” algorithms that put the entire US progressive media lower in search rankings so it would be harder to find them.
As you can see, Google and Facebook are not cool or groovy companies. They’re as much as part of the Deep State as the rest of them. These are large corporations and part of the Deep State is the corporations. They are run by billionaires and another part of the Deep State is the very rich. So you can see that even the modest and very minor alternative media is already too much for the Deep State and the Powers That Be.
The best way to see the Deep State is to see as The Powers That Be, the powerful group that runs this country, the foreign policy establishment, or the ruling class. These are the people who run this country and in particular control its foreign policy.
It is important to note that the Deep State includes nearly all US corporations and nearly all of the US rich, the 1%, because after all, the sole purpose of US foreign policy is to benefit large corporations and the rich, the 1%. There’s nothing in US foreign policy for us, you, me, and the little guy. In fact, you could argue that US foreign policy is objectively opposed to us. It’s a hostile force that works against us.
That’s a big reason why any American who doesn’t want to fight for the rich and the corporations should never join the US military. You’re fighting and dying for the Watsons, the Trumps, General Electric, Exxon, and AT & T. If you want to go fight and die for those entities, be my guest, but I doubt if many Americans join the military to do that.
So the US media is for all intents completely controlled at least as far as foreign policy is concerned. I would not say it is controlled on US domestic policy, though it is more controlled on that than you think. The Deep State is indeed split into a Right faction and a Left faction. It’s just that the Left faction isn’t really left at all. The Left faction of the Deep State is, for instance, Hillary Clinton and Barack Obama. We may as well be living in the USSR with Pravda and the rest of the state media. That’s how much real press freedom we have in the West.
What is even more shocking is that it’s not just the US media that is controlled. Nearly the entire Western media from right to left has been lockstep on all of this anti-Russia campaign. So it is not just the US that lives under controlled media. All of us in the West live under completely controlled media with no dissident media to speak of other than a few broke and little heard of outlets.
Everything you read below is true. The only thing that I am not sure of is Russia influencing the US election. They might have tried to do that, but even that story seems pretty hokey.
The rest of it is straight up facts. If you read carefully, you will see that nearly every fact below completely contradicts an alternative fact that was supplied by the controlled Western media.
All of you in the West are being lied to, all the time. All day all of the time and everywhere. There’s almost no escape from the Western Deep State spider web.

Trump Asks Russia To Roll Over – It Won’t

Donald Trump may perceive these bad cop/good cop tweets as a serious way to negotiate with Russia. They ain’t.

Donald J. Trump – @realDonaldTrump – 10:57 AM UTC – 11 Apr 2018
Russia vows to shoot down any and all missiles fired at Syria. Get ready Russia, because they will be coming, nice and new and “smart!” You shouldn’t be partners with a Gas Killing Animal who kills his people and enjoys it!

Donald J. Trump – @realDonaldTrump – 11:37 AM UTC – 11 Apr 2018
Our relationship with Russia is worse now than it has ever been, and that includes the Cold War. There is no reason for this. Russia needs us to help with their economy, something that would be very easy to do, and we need all nations to work together. Stop the arms race?

Russia said it would destroy the platforms that launch the missiles, not only the missiles themselves. Did nobody explain the difference to Trump?
There is reason that U.S. relations with Russia are now worse than they have been for some time and Russia is not responsible for these. The GW Bush administration killed the Anti-Ballistic-Missile treaty which guaranteed Mutually Assured Destruction and thus strategic stability. The Obama administration launched a trillion dollar program to ramp up U.S. nuclear capabilities and ballistic missile defense with the aim of achieving superiority in a nuclear conflict.
It is cynical to say that “Russia needs us to help with their economy”. The U.S. under Trump is waging economic war on Russia by implementing more and more economic sanctions. The last round on Friday targeted Russian industrialists, many of whom are not even aligned with Putin. Aluminum magnate Oleg Deripaska, disliked in the Kremlin, lost 15% of his fortune. The Rubel plummeted against the dollar for two days in a row. U.S. Treasury stooges are now traveling in Europe to press European banks to shut down all services for Russian companies. 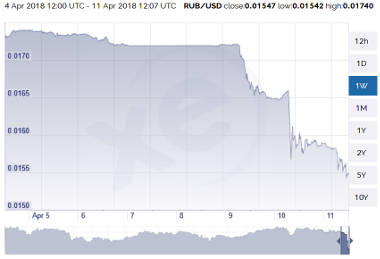 bigger(Ironically both economic attack vectors will help Putin’s program. Since 2014 Russia has been pressing its oligarchs to repatriate the billions the stashed in ‘western’ offshore banks. They will now do so out of fear of confiscations. The lower Rubel will increase local production and allow for cheaper exports.)
The U.S. incited Georgia to attack Russia. It ‘regime changed’ the Ukraine. It attacks Syria, an old Russian ally. Then there are the hoaxes that get attributed to Russia without any evidence. Russia did not influence the U.S. election. It did not poison the Skripals. There was no ‘chemical attack’ in Douma.
Russia has all kinds of reasons to be hostile to the U.S. but always stays calm and well mannered. It is stupid to mistake that for fear or inferiority. Taunting Russia like Trump now does will only increase its resistance to U.S. moves.
Is Trump trying to make an offer to really help Russia’s economy and to stop the arms race?
If Russia would roll over and give up on Syria would Trump really lift the sanctions? Would he really stop the U.S. race for nuclear supremacy? Could he even promise to do such? And why would anyone believe Trump anyway?
Unlike western European countries, Russia is not led by yapping poodles. The Russian government and its people will not roll over. They have historically never done so. President Putin will start his period of governance on May 7 with a war cabinet structured and manned for conflict. He expects a long fight.
Russia will have to respond to any U.S. strike on Syria. It needs to do so to keep face and the faith of its allies. But it also needs to so in a way that avoids further escalation. Something that is very strong, in a different theater and not attributable? Or something that is openly targeting U.S. interests, but not U.S. soldiers, in the Middle East?
It is Israel which is behind the war on Syria and which is pressing for further conflict. There are one million Russians in Israel, many of whom are not even Jewish. Could Russia ask them for help to change the strategic picture? Or should it increase support for those who directly fight the Zionist state?