From Global Research.
The Americans are getting more and more insane by the day over there in Syria, and it looks like the neocon dream is starting to come true. What is going on here is that the US’s pals, ISIS, Al Qaeda and all of the other groups who more more less share their same philosophy, are starting to get badly beaten on the battlefield. In particular, the situation in Aleppo looks very bad.
That is why John Kerry, Turkey,Saudi Arabia and Qatar just poured weapons into Al Qaeda’s hands and assembled 10-15,000 fighters to flood into Eastern Aleppo. Every day, more and more Al Qaeda type jihadis come in from Turkey.
Not long ago, the Saudis flooded Syria with 3,500 Al Qaeda type jihadis from Turkey. A similar large force of Al Qaeda types is in the Jordanian border where they have been moved from their training camps in Jordan. It is at these camps that US military advisors train Al Qaeda type jihadis for war on Syria.
The weapons come from Turkey, Saudi Arabia, Qatar and the US. The weapons from Turkey, Saudi Arabia and Qatar are given to them by the US, whereupon they are then flooded into the Syrian battlefield. So ISIS and the Al Qaeda type groups are all using US weaponry. In addition, the CIA runs large quantities of weapons in via Turkey to its favorite jihadists. It doesn’t really matter who the CIA gives the weapons to. The weapons all end up in something that amounts to an arms bazaar inside Syria where they are distributed to any group that has the money to buy them. It is in this way that the CIA supplies Al Qaeda and ISIS with much of their weapons.
So our Al Qaeda pals are getting beaten on the battlefield by Syria, Hezbollah, Iran and Russia. The US is panicking because its Al Qaeda buddies are losing the war. If Aleppo falls to the Syrian regime, the war may be nearly over for the rebels. Nevertheless, it will probably continue on for as long as the US, Saudi Arabia, Turkey, and Qatar continue to pour men and weaponry into the conflict. They can feed this thing for many years. 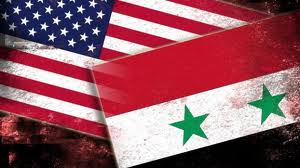 Tensions amid Syria’s conflict has escalated with warnings by the United States that it would use force against Syrian aircraft operating over their own territory. The US claims to have aircraft operating over Syrian territory and ground forces below, mainly in and around northeastern Syria near the city of Al-Hasakah.
CNN in its article, “Top US commander warns Russia, Syria,” would report that:

In the most direct public warning to Moscow and Damascus to date, the new US commander of American troops in Iraq and Syria is vowing to defend US special operations forces in northern Syria if regime warplanes and artillery again attack in areas where troops are located.

Unlike Russian and Iranian forces operating in Syria, US forces have not been authorized by Damascus to enter Syrian territory. US operations in Syria violate Syria’s territorial integrity and constitutes as violation of international law.
And while US military and political leaders attempt to portray this most recent confrontation as a matter of US self defense, in reality it is the fulfillment of longstanding US policy papers that have called for the establishment of so-called safe havens and no-fly-zones (NFZ’s) over parts of Syria as an intermediary step toward regime change, the stated objective of the US government in Syria.
In 2012, the following year of the Syrian conflict’s beginning, a Brookings Institution paper titled, “Assessing Options for Regime Change,” would state:

An alternative is for diplomatic efforts to focus first on how to end the violence and how to gain humanitarian access, as is being done under [Former UN Secretary General Kofi Annan’s] leadership. This may lead to the creation of safe-havens and humanitarian corridors, which would have to be backed by limited military power. This would, of course, fall short of U.S. goals for Syria and could preserve Asad in power. From that starting point, however, it is possible that a broad coalition with the appropriate international mandate could add further coercive action to its efforts.

Here, US policymakers are admitting that the use of “humanitarian” concerns is a cynical steppingstone toward more direct military intervention. The unfortunately reality of this strategy, as seen in Libya, is that US “humanitarian wars” end up costing a vastly larger toll in innocent human life than the alleged abuses cited to initiate the war in the first place.
This plan of using humanitarian concerns to incrementally establish a foothold in Syrian territory through safe-havens and NFZ’s would constantly evolve, be updated and revisited throughout the entire duration of the Syrian conflict.
America’s True Intentions in Syria
More recently, The Brookings Institution’s “Order From Chaos” blog published a post titled, “What to do when containing the Syrian crisis has failed.” Brookings policymakers discuss in it once again the prospects of establishing what would effectively be NFZ’s:

We must also be clever about employing various options for no-fly zones: We cannot shoot down an airplane without knowing if it’s Russian or Syrian, but we can identify those aircraft after the fact and destroy Syrian planes on the ground if they were found to have barrel-bombed a neighborhood, for example. These kinds of operations are complicated, no doubt, and especially with Russian aircraft in the area—but I think we have made a mistake in tying ourselves in knots over the issue, since there are options we can pursue.

…we should push the debate about what creating safe havens really means. I don’t think we should start declaring safe havens, but rather try to help them emerge. The Kurds are making gains in Syria’s northeast, for instance, as are some forces on the southern front—so, if the United States, in cooperation with its allies, accelerates and intensifies its involvement on the ground in those areas, safe havens can essentially emerge. An important advantage of this approach is that it doesn’t require putting American credibility on the line, but does help local allies build up and reinforces successes on the ground.

Here, Brookings specifically mentions Syria’s northeast. It should be noted that none of this is being discussed by US policymakers in the context of fighting terrorist organizations like the self-titled Islamic State or listed terrorist organization Jubhat Al-Nusra. Instead, it is clearly within the context of seizing Syrian territory toward the end goal of regime change, with the Islamic State and Al-Nusra merely pretexts for US forces entering and operating within Syrian territory.

Similar attempts to create such safe-havens are in motion in Syria’s south, with British special forces now allegedly operating on the ground to incrementally “accelerate and intensify” Western involvement on the ground.
It is the literal fulfillment of the plans recently laid out by Brookings policymakers.

Displacing US Forces from the Game Board
With US-supported militants being pushed back in and around Syria’s northern city of Aleppo and prospects of Western-backed militants succeeding elsewhere throughout the country increasingly unlikely, the creation of safe-havens and NFZ’s over parts of Syria directly by Western forces remains a last but desperate option.
Displacing US and British forces on the battlefield with an expansion of forces from among Syria’s allies could finally see these last game pieces in play by the West pushed off the board entirely.
Diplomatic efforts appear to be underway with Syria’s Kurds in particular to encourage them away from what will be a self-destructive geopolitical move made only to Washington’s benefit. Providing alternatives to Western training and support for Kurds and other local forces in the northeast in a genuine fight against the Islamic State and other foreign-backed militant groups operating in Syria could also help eliminate clashes the US may use to cynically escalate the conflict into a direct confrontation with either Syria or Russia (or both).
US strategy in Syria is based on 5 year old plans that even 5 years ago were difficult if not impossible to implement, fraught with risk and even should they succeed, left a long and difficult road ahead of US ambitions in Syria and throughout the region. 5 years later, however, these difficulties and risks have only increased. That the US is still exploring this last and poorest option indicates a bankrupt foreign policy wielded by an increasingly unbalanced world power.
Careful diplomacy and expert strategic maneuvering by Syria and its allies will be required to avert Syria’s conflict from plunging deeper into tragedy, and ironically, may also help the US from tilting over further out of balance.
The New Atlas is a media platform providing geopolitical analysis and op-eds. Follow us on Facebook and Twitter.
The original source of this article is The New Atlas
Copyright © The New Atlas, The New Atlas, 2016

0 thoughts on “US Seeks “Safe Havens” in Eastern Syria”