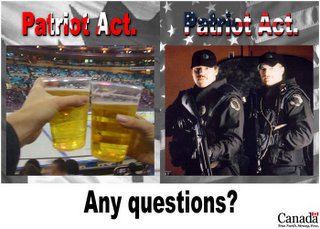 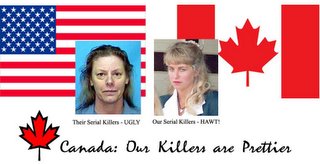 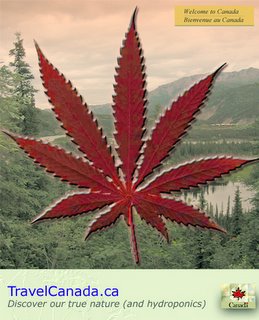 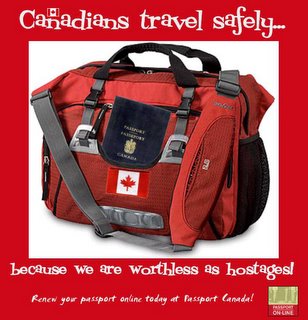 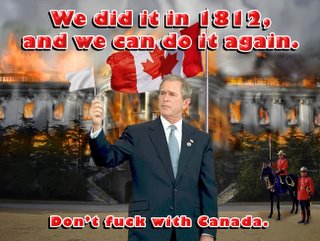 Since so much of America, and the American public, are depressingly, frighteningly reactionary, and are sadly reaping what they have sowed by their extremist views, this blog tends to wistfully look north at what America could have been. Yes, Canada.
This blog is a strong supporter of most things Canadian, except the new Bush-loving Prime Minister and Canada’s terrible imperialism in Haiti. Nevertheless, Canada still sits up there, happy and warm by the fire, a reminder of what America woulda, coulda, shoulda, but probably will never be.
Why? Because far too many Americans are far too dumb and reactionary to create a decent country, so they will have to wallow in the militaristic banana republic mudhole they seem to want so much. Let them wallow, with all the deaths, injuries, outrages, wars, and disasters that go with the fascist program, and see how the American pigs like it.
Let us drink a toast to Canada! And down with George Bush’s America!
Update: I just deleted a couple of rightwing posts telling me basically, “America, love it or leave it!” That is one thing I will not tolerate from anyone; all comments along those lines will be immediately deleted and every rightwing baboon who posts that will be banned. “Love it or leave it” has to be one of the stupidest things anyone could say to anyone.
How come it is only rightwingers who say, “Love it or leave it?” How come rightwingers only say that to US liberals? How come US rightwingers never tell people living in any of the countless countries they hate to “love it or leave it”? Why do you have to like where you live anyway? A cursory glance at most of the nations on Earth, and I can understand why any sane person would not like those societies very much.
Let’s face it, most societies are deeply reactionary, and from a progressive POV, they are objectionable. On that basis alone, I would be dissatisfied with the reactionary nature of the societies of the vast majority of countries. In other words, I wouldn’t be all that happy with many other societies either.
Allow me to clarify: I do hate one thing about America, and that the deeply conservative nature of our society. On the other hand, aside from that and everything that springs from that, I like most everything about this place.
It’s better than most countries on Earth in that we live extremely well here, the populated areas look nice, the roads are nicely kept up, and the cars, buildings and residences look nice and are kept up.
There are plenty of nice stores with lots of stuff to buy and the water, sewage, electricity, heating, air conditioning, trash collection, and local governments all function well. People dress well, women look nice, infectious diseases are at a low level and many places have little crime. It’s sanitary and clean. Much of it is not paved over yet and those areas are often beautiful.
The cops are fairly honest and so is government at most levels, compared to most of the world. As long as you have a job, a decent income and health insurance and you ignore the politics, you can live quite well here, and beyond that, it’s actually a pleasant place to live.
So, saying Robert Lindsay “hates America” is quite misleading. Any self-respecting progressive would surely dislike the reactionary, quasi-fascist nightmare that George Bush’s America has become. But a society’s politics is only one small aspect of a nation. If all dissatisfied Americans had up and left the country, nothing progressive ever would have occurred in this nation and we would be stuck in backwardness.