Repost from the old site. This is a famous post. It got tons of hits on the old site, but it’s an old post. 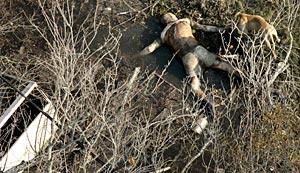 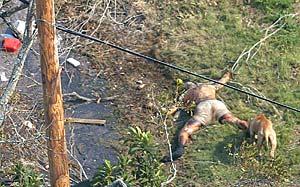 As you can see from these pics here, the widespread worries about all the lost pets, especially dogs and cats, starving to death in NOLA after Hurricane Katrina are somewhat overdrawn. Clearly, some pets, such as the enterprising hungry stray dog above, are finding plenty of food on their own, although it’s not exactly Alpo.

Some folks asked me why the MSM (mainstream media) doesn’t show these pics, and I said I did not know.

Clearly, the MSM have been carrying water for Bush for much of this disaster, though at the start, segments of the media demonstrated some rarely-seen backbone and stood up to Bush for once, as demonstrated in my previous post, New Orleans Is Gone.

Does the media not like to show disgusting pics like this, out of ethics (sic) or worry over being criticized for pandering (as if they don’t pander enough as it is)?

Not sure what the answer is. Feel free to weigh in.

One more thing: alligators. Initial posts noted that rumors of alligators in NOLA after Katrina were unfounded. However, we now have verification, via Juan Cole’s blog, that alligators have in fact been lunching on folks in NOLA. Sorry folks, no pics yet. But I’m working on it.

What about other hungry critters? Anderson Cooper on CNN noted here that he observed rats eating corpses in NOLA. Sorry, no photos of that either.

I have received numerous complaints and comments about this post:

In order to try to resolve these questions, I somehow tracked down the freelance photographer who took the second photo (I still can’t figure out who took the first photo).

Allen Frederickson is a freelance photographer from Milwaukee who was in NOLA after the flood to cover it as a photojournalist. I communicated with Fredrickson via email and phone to try to resolve some of the questions posed above about his photo. Here is his abridged email correspondence:

Robert, you present some interesting questions. I work for Reuters as a contact photographer, and have since August 1990. Faking or manipulating photos is not a smart practice, and something I do not engage in. Corbis [where one of the photos was found on the web] does some of the secondary sales for Reuters .

The photo in question was taken in New Orleans on at 3:39 PM (according to digital info on my camera) on September 5, not September 6, as National Geographic states on their website.

The photo was taken as I flew as an embedded photographer in a U.S. Army Chinook helicopter piloted by National Guard aviators. The Guard was engaged in repair of a levee wall very close to the south side of Lake Pontchartrain.

The dog in the photo appeared to be a stray, and the corpse was about 50 yards from the spot where 16,000 pound bags of sand (actually crushed limestone) were being dropped. On two separate runs, about 15 minutes apart, the dog appeared to be eating this poor man’s leg.

I cannot imagine the dog was simply licking his master, but that’s an outside possibility. The pilot of the Chinook told me he’d seen two dogs, a black one and this brown [or yellow] one, near the cadaver for the past three days, (September 3-5), as he helped drop bags. There were no live persons on the ground in the area, and no indications that either of the two dogs near this man would be cadaver dogs.

In his phone conversation with me, Allen basically reiterated these points. He said that cadaver dogs operate with police close by, and there were no police or any live humans period anywhere near this site for days on end. Furthermore, the dogs in question had been running wild and hanging around the corpses for three days prior, once again under no human supervision.

I think we can put this matter to rest and assume that this yellow dog was actually eating a human corpse in NOLA at 3:39 PM on September 5, 2005 on the south side of Lake Pontchartrain. Further, we can suspect that the same dog may have eaten another corpse around the same time frame (note the first pic from an unknown source).

We can also assume that the yellow dog and a black dog had possibly been eating at least the body in the second pic above for the prior three days.

Let us deal with the questions above. The dog in the pics is a stray dog, not a cadaver dog. The bodies were real bodies, not dummies. The fact that the what may be the same dog is eating two bodies is not relevant and does not prove he is a cadaver dog.

Dogs who eat people eat extremities, not just central areas, and cadaver dogs are not the only dogs who investigate extremities of corpses. Stray dogs do not always operate in packs, maybe especially after major disasters like this one.

Based on Fredrickson’s statements, National Geographic is not exercising poor, National Enquirer-style judgment in its photos or captions, nor am I dishonest.

The notion that blogs are an inherently dishonest medium is a common prejudice against us poor unpaid bloggers, and it seems to be without substance. Some bloggers are principled and fact-check (ahem), well while others are pretty atrocious and don’t check sources.

In contrast, the MSM has been demonstrably dishonest for a long time, as Noam Chomsky’s Manufacturing Consent and other works make clear.

The second photo above (Fredrickson’s photo) has appeared in a number of other places on the Net. The original National Geographic site where the photo appeared is here. It also appeared on the Corbis site, where some posters nabbed it.

The first photo mysteriously appeared only on this strange site here. The site is accessible only through it’s uploads folder; the main page is blank. In the past, this odd page has been used to upload controversial photos to the web. Fredrickson says he did not take that shot, and he knows nothing about it. The page with the photo may be affiliated with the Indymedia Pittsburgh site here, based on its partial web address.