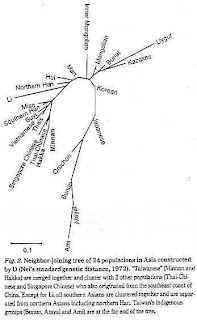 Click to enlarge. This is the chart from the paper, The Origin of Minnan & Hakka, the So-called “Taiwanese”, Inferred by HLA Study, utilized in this post.

I usually try to be very conservative about adding in new races to my races of man post, but sometimes I just feel like I’m forced to. Based on this article, and in particular, the figure above, forced me to make some new splits.

The question was what to do about the Taiwanese people. Not the Taiwan aborigines – but the Hakka and Min Nan people of SE China who settled in Taiwan in the past 400 years. It turns out that they appear to be a discrete race, and that they are linked to Singapore Chinese and the Thai Chinese. In Singapore and Thailand, Chinese form a market-dominant minority position.

They are a minority of the population, but they tend to run businesses and be very wealthy. Similar cases are seen in Indonesia and the Philippines, where tiny Chinese minorities of 2-3% control up to 70% of the wealth in the nation.

So the interesting question arises – who exactly are the Chinese minorities of Thailand and Singapore? By genetic studies, we can now see that they are SE Chinese people related to the Min Nan and the Hakka.

Southern Min is actually a number of separate languages: Min Nan proper, Amoy, Teochew and Hainanese , at the very least.

It is nonsense to say someone speaks “Chinese”. There is no such thing as a language called “Chinese”.

The Li are a transitional group between the Northern Chinese and the Southern Chinese, though they live on Hainan Island in the far south of China. They speak a Tai-Kadai language called Hlai which has 667,000 speakers. Use is vigorous; the language is doing well, but it is generally not written, although a Roman script exists. Mandarin is used for writing.

The Oroqen are nomadic people who live in far northeastern China and speak a Tungusic tongue. As you can see from the chart, they are closer to the Japanese than to the NE Chinese. There are only 1,200 speakers left out of a small 7,000 population, but there are 800 monolinguals, and use is vigorous by those who speak the language.

They live by hunting and used to practice shamanism. They still lack an official script for their language, but there are radio programs in Oroqen.

The truth is that both the Oroqen people and their language are in poor shape, and most of the blame can be placed on the Communist Chinese regime, even though the regime has also done many good things for the Oroqen. The Cultural Revolution in particular was a period of insanity, stupidity and terror.

An Oroqen Race was added to the NE Asian Major Race due to the extreme divergence of these people. I also added Inner Mongolians to the Mongolian Race inside of NE Asian.

I added the Buyei to the Tai Race within the SE Asian Major Race and created a new race called SE Chinese Race, consisting of Min Nan, Hakka, Singapore Chinese and Thai Chinese. The Buyei live in southern China and northern Vietnam and speak a Tai language that has over 2 million speakers yet has no official status. Buyei language use is vigorous, and it is in good shape.

There is a romanized script, and there are newspapers in the language, but they mostly use Mandarin for writing. The Buyei language is probably made up of a few separate languages, because some of the dialects are not mutually intelligible. The language is very close to the Zhuang language.

The SE Chinese Race really consists of the descendants of the ancient Chinese people known as the Yueh. The Yueh, or Yue, formed a state in southeastern coastal China during the Warring States Period and the Spring and Autumn Period. The state lasted from about 525 BC to 334 BC. The Chinese were already involved in metallurgy and were producing excellent swords during these periods.

21 thoughts on “Revisions to Races of Man Classification”