There was an unconfirmed sighting of a wolverine in Shasta County, California a year ago, on Friday, September 26, 2008. The sighting occurred at 1 PM on a sunny day. The wolverine was crossing Highway 89 from north to south. It was walking fast more than running.

It was described as paler than most photos the observer had seen – more of a dark tan. This color is actually common for wolverines, and if this was an actual California wolverine, this subspecies was known to have a much lighter coloration. He observed it crossing the road at about 50 feet away until it vanished into the forest.

The observer assumed it was a pretty common animal until he went on the Net and did some research and found out how rare it was. He reported the sighting to this blog, and I believe him. Anyone who wants to talk to the observer about this sighting can try to contact him via me at my email

The sighting was around Dead Horse Summit, about 20-30 miles west of McCloud, between the small towns of Bartle and Pondosa. This area is near MacArthur-Burney Falls State Park. That’s a really beautiful area. This part of California is very White, deeply conservative and very sparsely settled. I have been near this part of California, but it was so long ago, I don’t even remember it. 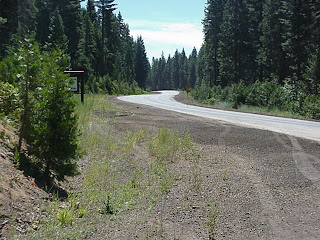 Dead Horse Summit. This is where the far southern end of the Cascades Range of Washington, Oregon and northern California meets the far northern end of the Sierra Nevada. This is an area where the California spotted owl probably intergrades with the Northern spotted owl. Wolverines are already known to exist at decent populations in southern Oregon.
These are definitely California wolverines. If the California wolverine subspecies is to repopulate California and the Sierra Nevada, it will be through this corridor linking the two ranges.
There is a fascinating old railroad track that runs through this area. You can take these little several man-railroad cars that cruise along the tracks and check out this train track. It’s really popular with model railroad fans for some weird reason. I’m not even sure if this track is even used by real trains anymore. As far as I can tell, it’s a tourist trap for model railroad dudes. Funny.
Please follow and like us: