Repost from the old site.
The fires in California last October 2007 were historic. 1,500 homes and 500,000 acres were burned, 9 people died, and 85 more were injured, including 85 firefighters. Here are some of the more spectacular pictures of the fires. 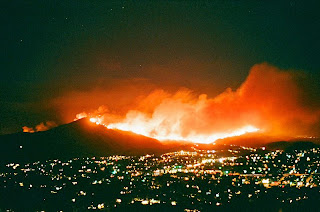 An incredible photo of Mount San Miguel burning during the Harris Fire on October 23, 2007. I was following all of these fires closely and I remember as this wall of flame charged down Mt. San Miguel towards the homes below. This horrible fire burned 206 homes and 252 outbuildings and damaged 253 structures. It killed 5 people and injured 55 more, 34 firefighters and 21 civilians. What an incredible fire. Those flames must be 100-200 feet high. 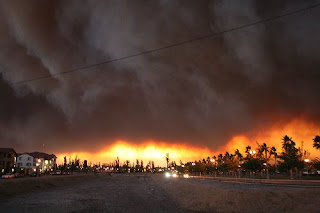 This photo still creeps me out. It reminds me of some popular horror movie like Friday the 13th. I keep expecting Freddy to pop out and start roaming the streets. This photo was taken in Irvine, California, and the fire is the Santiago Fire. The wall of smoke is so vast it seems to have blotted out the sun altogether. Awesome photo. I’m not sure when this was taken. 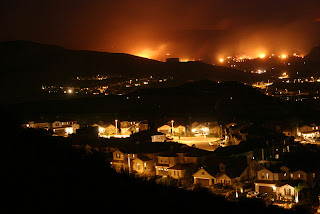 Another strange and very creepy photo. A number of fires were burning in and around Santa Clarita northeast of Los Angeles at the time that this photo was taken on October 21, 2007. The fires with the halos around them almost look like UFO’s. The homes in front lit up by street lights adds to the creepy effect. 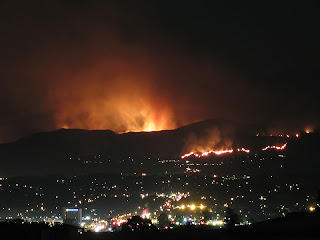 A strange photo of the Santiago Fire taken on October 23, 2007. The Hellish-appearing flames of the fire seem to loom in the background, while another strange line that looks like headlights on a distant freeway burn closer to town. The photo was taken from Aliso Viejo, with Lake Forest in the foreground.