Note: Repost from the old blog.
A pretty interesting new development in Bhutan – a new Maoist group has formed, with links to Maoists in Nepal and India. It’s been growing in the refugee camps of Bhutanese refugees for some time now. They’ve been threatening to start a people’s war in Bhutan for some time now. I think the real goal here is just that they want to go back to Bhutan.
It has its roots in the expulsion of 100,000 Bhutanese of Nepali origin who have been living in Bhutan for over 100 years. They tend to live in the lowlands and resemble Indians. The people in the uplands tend to look more Asian.
Bhutan has traditionally been a horribly backwards country with some of the worst health and social figures on Earth. The monarchy has instituted a campaign to improve education and health care in the nation and seems to have done a pretty good job of it.
There was no reason except sheer racism for the expulsion of the Nepali-Bhutanese from Bhutan in the early 1990’s. At that time, they made up a majority of the country, and I guess the Asian types living in the uplands felt that they were not “real Bhutanese”. But they were perfectly legal residents resident in Bhutan for 100 years, and all were citizens.
They have festered in refugee camps in Nepal, agitating for return to Bhutan. Now a lot of the Bhutanese are starting to leave the camps with offers of settlements in 3rd countries. It is in this context that the Bhutan Communist Party (Marxist-Leninist-Maoist) has grown to a large size. 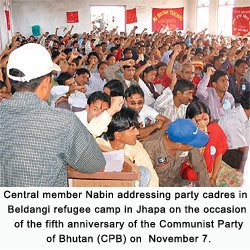 The caption tells the story here. These folks seem pretty passionate about their cause. They’ve clearly gained a lot of inspiration from the Nepalese Maoists, who have been so successful that they are now leading the government.

A few small bombs were set off in Bhutan during the elections early this year, but I don’t think there were any casualties. There were a few arrests. I’m dubious that these rebels will find many converts among the Asian Bhutanese.
Despite the move to democracy in the past year (the King abolished the monarchy) the BCP-MLM says that the monarch is still running the show behind the curtains. Apparently the nation is still feudal to semi-feudal. This would be in the tradition of the Buddhism in the region.
Few realize that the Dalai Lama headed up a horribly feudal Buddhist theocracy in the 1950’s when China got rid of it. I do support Tibetan independence, but the feudal regime should not be romanticized.