Note: Repost from the old blog.
Always great to report news of critters rising from the dead.
Debbie Martyr is a woman who has been working for some time in and around Kerinci-Seblat National Park in Sumatra, trying to come up with evidence for the Orang-Pendek, a new species of ape.
While doing this, she came across evidence of the Sumatran muntjac, last seen in 1930 and long since declared extinct. It was captured in a hunter’s snare. Muntjacs are known as “barking deer” but I don’t know much about them otherwise. 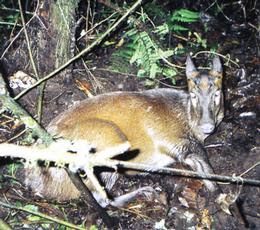 A Sumatran muntjac, thought extinct for 78 years, rediscovered in a national park in Sumatra. This one was caught in a snare, so they could capture it and study it. Too bad the Sumatran rainforest is being destroyed at an incredible pace.

A species of Harlequin frogs (actually called Andersson’s Stubfoot Toad), thought extinct for over a decade, have been rediscovered in a small population near EcoMinga’s Rio Zuñaca Reserve in Ecuador. It was last seen in 1937 and was declared extinct long ago. 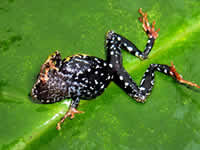 A photo of a dead Atelopus palmatus, recently rediscovered after 71 years in Ecuador.

The Desert Mouse from New South Wales, Australia, was last seen in 1857, 151 years ago, and was long declared extinct. It was recently rediscovered in Sturt National Park near Tibooburra. 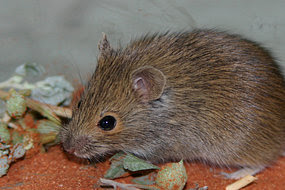 The Desert Mouse, found in a drought-hammered part of a national park in New South Wales, thought extinct for 151 years.

And mountain lions are now officially documented in Louisiana after many reported sightings. 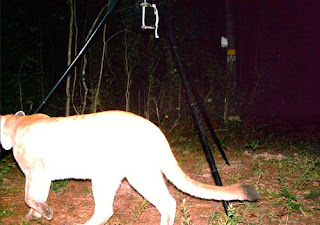 Photograph of a mountain lion in Allen Parish, Louisiana. My friends and relatives have seen these things, but I have never seen them. If you live in the woods in California, these animals are around all the time, but you just never see one. Amazing how they hide since they are so huge. There’s not much reason to be afraid of these things, but I usually carry a large pointed hiking stick when I go hiking anyway.They hardly ever attack people unless you are jogging or riding a bicycle. That is because when you do that, you look like a deer, an animal they are used to killing. They also attack little kids, because that is about the size of their usual prey too.

It seems to be a small population that is moving from East Texas into the state. There is a lot of controversy surrounding the Eastern Cougar, long thought to have gone extinct. But sightings have continued and have really stepped up in recent years. It’s hard to come up with good, hard evidence though.
Many of those spotted are thought to be escaped pets, but some are probably real. We know for sure that there are cougars in Minnesota, Michigan and Wisconsin right now, and there is good documentation of them around the Chicago area. Yes, mountain lions somehow crossed the Mississippi River. How? Who knows?
Cryptomundo is a good site for all this sort of thing, plus lots of Bigfoot, Yeti, Tasmanian Tiger and other more dubious stuff.