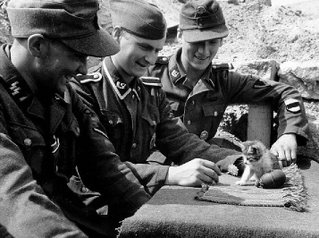 Some regular, ordinary Nazis, people just like you and me except that had fallen into the trap of ultranationalist genocidal racism, play with a kitten they found. As you can see, these folks are not the pure evil people Jews make them out to be. Evil people don’t play with kittens – that’s what folks like you and me do. They are just regular folks who took a really, really wrong turn.Yet they could be you and me and you and me could be them. If you don’t believe that, toss it around in your head and see if it starts to make sense for a while. Photo via Robert John, a colleague. His website is here. John is one of the pre-eminent scholars on the Middle East, especially Palestine.