Repost from the old blog. My post suggesting that Southern Europeans have some Black blood in them really pissed some people, apparently Southern Europeans, off. It seems like there is nothing that pisses these Italians and Spaniards off more than the suggestion that they have a few Black ancestors somewhere.
My post here, A Little Black In All Of Us, has aroused a tremendous amount of controversy. Not to beat this dead horse with a stick, but there are Southern Europeans and their supporters who strongly object to the notion that they have more than a smidgen of Black blood in them. In fact, there are websites that are set up in part to specifically negate that premise. Some of their supporters are simply racists.
This is definitely a sore point with Southern Europeans. As an Italian friend of mine said, “The Southern Italians really hate to be called negri. If you call them negri, they pull out the knife.” A little sensitive?
In my post, I suggested that some Southern Europeans, notably Sicilians, Greeks, Spaniards and Portuguese, had more than a negligible amount of Black in them, around 5%. This produced a hailstorm of protest from the aforementioned folks, and resulted in some bannings from the comments.
I admit I’m not an expert on the subject. The Black genes in these Southern Europeans seem to have come from Ethiopia. This much is clear. The relevant haplogroups are M1, M78, E3b, E3b1, L1, L3, E-M35 and some others. If you follow the links to the relevant scientific journals, they will describe these lines as sub-Saharan.
The deniers say that they are not really sub-Saharan, they are Ethiopian, or Afro-Asiatic, or Eurasiatic, or whatever. In general, they say that these are Caucasian lines inside the Ethiopians.
I’m not sure any of that makes sense. Better than sub-Saharan lines, I would describe these lines as “Saharan”. They arose in the Sahara and possibly in Arabia very long ago. They are still quite common in Somalia, Ethiopia and Sudan (north and south). Those folks look White to you? Of course not. 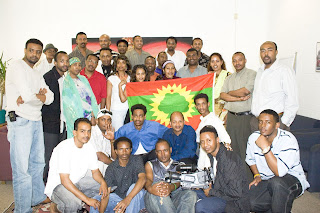 Click to enlarge. The original, with much better resolution, is here. These are Oromos, an Ethiopian people that is fighting for an independent state in Ethiopia. A commenter, Stopped Clock, left some interesting comments. He said first of all to call these ancient lines “Saharan” is correct if referring to the much darker-skinned people who lived in the Sahara long ago when these lines arose, but not to the Arabid types who reside in much of the region today (more recent arrivals).
He also suggested a resolution to this problem. To say that these Ethiopians are 40% White and 60% Black as so many do seems simplistic and erroneous. The “White” lines go back to Arabia 45,000 years ago. People just call that line Caucasoid because it comes out of the Middle East. But I have a strong hunch that the people who lived in Arabia 45,000 years may have looked a lot more like Black people than like Whites. If anything, I think they may have looked like these interesting folks.
He also said that the latest thinking is that these people are not some mulatto Black-White mix; instead, they are an ancient African race that evolved separately from the others and ended up looking quite different.
In addition, recent data shows that these are the most ancient humans of all, older than the Khoisan. And other data suggests that the people who came out of Africa may have looked something like this. Whether these people are the original H. Sapiens is another matter. From 90,000-135,000 years ago, there were a series of droughts in Africa. This may have led to a split in humanity into two main lines – one in East Africa and another in South Africa. Presently, we do not yet know which line gave birth to modern H. Sapiens.
I’m not much of a judge on males, but these people seem quite attractive. And some of those women in the center are absolutely beautiful. They have an appearance that is both exotic and incredibly striking.

The Arabids are a Caucasoid racial type, an evolved Mediterranean type that is adapted to desert climates. They’re often dark skinned.
It’s quite clear to me that Arabids are part of the White Race. I would divide the White Race (not synonymous with the Caucasian Race) into three main types: West Nordids, East Nordids and Mediterraneans. The Whiter Arabids and Berberids are obviously Mediterraneans. The notion that White Arabs are non-Whites is seriously insane. Arabids are poorly understood and no one really knows when they arose and what their line of development looks like.
They are probably an old race. There is some evidence that Europeans 10,000 years ago looked more like Arabids than like modern Europeans. And now it is starting to look like neither modern nor ancient Egyptians were really classical Arabids. No one really knows how to classify them, but the best word is probably “Egyptian”. They are somewhat sui generis.
And Egyptians today are pretty much the same as Egyptians of Ancient Egypt, that is, they are not Black. It’s sad that Afrocentrists keep hammering away at this “Egypt was Black” thing. Let it rest.
I would also agree, much to the Afrocentists’ dismay, that Egyptians are basically a Caucasian people. They do have about 9% Black genes though.
Unless you know what you are doing, you probably don’t want to dive into this debate. This stuff gets real complicated real quick, and the debaters know their stuff.
It’s funny how some folks react to the possibility of the tiniest bit of Black blood like Superman to Kryptonite.
This woman here, Mathilda’s Anthropology Blog, who runs an otherwise excellent blog, is on a jihad to say that there is little Black blood in Southern Europeans. I don’t know what her motivation is. She also opposes “out of Africa” and “single migration to the Americas”.
White nationalists really hate the Out of Africa argument with a passion. “Grandpa was a nigger” is taking things just a bit too far. You gotta draw the line in the sand somewhere.
This post provides some good background on where the debate is at right now. Unfortunately, the whole mess has been contaminated by Afrocentrists, who are some of the most idiotic ethnic nationalists around.
As for me, I’m a bit tired of the whole “Black blood in Italians” debate and I’d just as soon let it rest.