[wpvideo MC5yaPEo]
Note: Repost from the old blog.
I am looking for a translator to translate this post into Korean. Email me if you are interested.
Warning! Graphic footage! Do not watch if you are easily upset! An 8.4 MB version of the video with better resolution can be downloaded on this site here.
The public suicide fad has spread to Argentina. Above is the video of the live TV suicide of Mario “Malevo” Ferreyra, an Argentine former police official. He killed himself on live TV in Tucumán Province, Argentina.
Malevo Ferreyra was Chief of the Brigade of Investigations of the State Tucumán in Argentina in the late 1970’s at the height of the Dirty War. In 1993, he was convicted for murdering three robbers in 1991.
He escaped from the courthouse clutching a hand grenade in each hand (!) and later turned himself in after the former governor of the province reduced his sentence. He served seven years for the killings. He ruled Tucumán with an iron fist before, during and after the Dirty War.
A warrant was issued by the National Guard yesterday for his arrest for kidnapping and torture during the Dirty War. The crimes were committed when he served at a secret weapons-depot-turned-detention center during the Dirty War. Just before the police were coming to arrest him, he committed suicide in front of his wife and kids on national TV.
He had just finished an interview the TV station Cronica on top of a water tank at his rural home in Tucumán. His home was surrounded by police and he would be arrested shortly. He protested his innocence, then said, “Hasta siempre, Maria (I will love you forever, Maria),” pulled out a .45 caliber revolver from his boot and shot himself behind the ear. He died on his way to the hospital shortly afterward.
After he shot himself in the head, his son embraced him and his daughter panicked.
Families of the victims say that the suicide was part of a pact of silence that would ensure that Ferreyra would not have to testify against his former colleagues.
Argentine politics is nasty, and sometimes deadly, business, with a lot of impunity, but that seems to be changing. 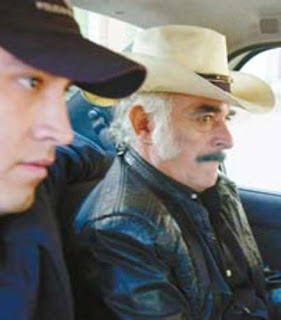 A typical image if “El Malevo” with his usual sombrero. Looks like a hard-living fellow. The name may come from a famous silent movie by the well-known Argentine director José A. Ferreyra (same surname) from 1921 called, La Maleva. I’m not sure what the movie is about. Ferreyra is a common surname in Argentina. The name may also be a play on a nickname of a famous Argentine soccer player Osmar “Malevo” Ferreyra (video). 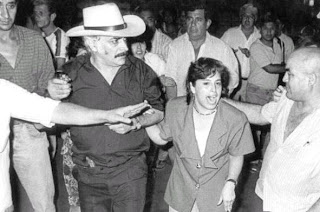 Here is another photo of El Malevo. I’m not sure what is going on here, or who the woman is. He looks like a pretty rough character. So do those guys around him. Argentine provincial politics is nasty, hardcore stuff. Sort of a cross between Sicily and Mexico. Lot of tough guys in power throwing their weight around, not much of a rule of law, political arrests and attacks, harassment of and attacks on journalists, corrupt and venal judges. The usual stuff.

Tucumán is a somewhat backwards, “provincial” province in the hinterlands of Argentina. It’s mostly agricultural back there, with a lot of sugar cane cultivation. The cops and politicians in this part of Argentina are some of the most brutal, venal, clannish and corrupt in the country.
There are still Indians living in this part of Argentina, and people are much more Mestizo here than in the rest of the country. It isn’t gaucho country, and it’s not the Pampas. More like the foothills of the Andes.
In the mid-70’s, this province was the scene of a little-known foco revolutionary movement led by the ERP (People’s Revolutionary Army). It failed, as all foco-inspired movements did. The ERP was then devastated by the Dirty War – they were history 1 1/2 years into the counterinsurgency. The ERP has long since abandoned armed struggle and now exists as a political movement.
Budd Dwyer, anyone? Video of Budd Dwyer’s live TV suicide here (warning: graphic). Jesus Christ man, the blood runs out of his nose like a waterfall.
I found the case of Christine Chubbuck, another public suicide, this time of a newscaster on live TV during her broadcast (!) to be particularly poignant.
I don’t like to diagnose the dead, but it looks like she had traits of Avoidant Personality Disorder . It’s something like social phobia, but a lot more pervasive. What’s odd is that she had such an extroverted job and most avoidants are serious introverts.
The symptoms are there: the lack of romantic relationships despite a tremendous desire for one and her beauty, good job, education and brains; the unrequited love for a colleague at work who would not reciprocate.
And at the same time, whenever people at work made friendly gestures towards her, she would blow them off. This is the “get them before they get me” mentality. I will reject them before they reject me. It’s perverse, but like a lot of perverse stuff, has its own crazy logic.
Good overview of APD. I don’t think I have ever known one. The primary symptom is extreme hypersensitivity to rejection. I’ve known people who have some of the hypersensitivity though. If you criticize them, they look like they are going to burst into tears. Then they often get really angry. These are grown “adults”, say 40 years old. I think they are babies, but maybe I should be kinder, since I’m not exactly normal myself.
I had a therapist once and I asked him if I was an avoidant. One of my games is “Psychiatric Medical Patient Syndrome” – going through the DSM and worrying I have every illness in the book. He said, no, because he had criticized me and I took it well. He said he had had 7-8 avoidants, and as soon as you criticize them in therapy, they get up and walk out of the office and never come back. That’s about the size of it.
Truth is, I really don’t care if people like me or not, as long as they hang around with me. I would be perfectly content to have beautiful women coming over here every day, screwing my brains out, pretending to like me, but actually hating my guts. As long as they pretend to like me, it’s all good. I don’t care what’s in someone’s deepest soul.
I’m also not freaked out by rejection. After about the millionth time, you pretty much get used to it. I figure if I freaked out about every little rejecting encounter I get, I’d probably be continuously suicidally depressed. You have to make it through life somehow. No one has to like you anyway; it’s a free country. Plus I’ve rejected lots of people myself, so what comes around, goes around.
Chubbuck also seemed to be awfully regressed into an almost childhood state when off work, despite being an uber-professional on the job. Strange case.
I had never heard of Dwyer’s or Chubbuck’s case until the Internet.
There are no available videos of the Chubbuck suicide, but there are five seconds of Chubbuck footage here on Youtube. There is also a Chubbuck segment on The Boulevard of Broken Dreams, a TV show (video clip). The police confiscated all of the Chubbuck suicide tapes as evidence of a crime and turned them over to the family.
In the excellent movie Network (1974) “I’m mad as Hell and I’m not going to take it anymore!”, the lead, a TV newscaster, threatens to commit suicide on live TV.